Since the Treaty of Rome (1957), the European Union has been committed to gender equality as a core issue. Since then, 13 directives relating to gender justice have been adopted. However, the control and evaluation studies of the 5th and 6th FP have shown that despite efforts to promote gender in research, women are still under-represented and the gender issue continues to receive no systematic attention in research projects.

Gender equality in research and innovation will be further specified within the 9th EU Framework Programme Horizon Europe (2021-2027). Having a Gender Equality Plan (GEP) in place becomes an eligibility criterion in 2022 for institutions* applying for EU funding. Furthermore the appropriate consideration of the gender dimension in innovation and research projects may be take into account under the excellence criterion (unless otherwise stated). And a gender balance within the research teams as well as in boards (experts groups and evaluation committees) is intended by increasing the participation of women. 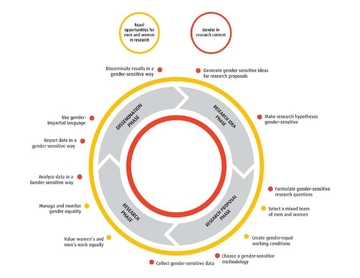 Source: "Toolkit Gender in EU-Funded Research" of the European Commission, Directorate General for Research and Innovation together with Yellow Window Management Consultants, Chapter 2.1 "How to Make Research Gender-Sensitive", 2011.

"Gendered Innovations 2: How Inclusive Analysis contributes to Research and Innovation"